Anytime it is cooler outside than the inside of a home, the QuietCool whole house fan (as known as an attic fan) will work effectively & quietly. In the summer, this normally happens in the late afternoon to early evening and through to the next morning.

When the QuietCool whole house fan is turned on, the fan will pull the cooler outdoor air into your home, through your windows, across your living space, into the attic, and out the attic vents replacing the hot stale air. This helps cool the home and attic by up to 30 degrees, allowing it to stay much cooler the following day.

The cool breeze begins when a window or two is opened and the QuietCool fan is turned on. The cooler outside air will immediately begin to create a breeze inside the home making the homeowner feel up to 10 degrees cooler, instantly.

This breeze will be carried through your home to each QuietCool whole house fan that is on and in use; thus beginning the cooling process. At the same time, the cooler outdoor air will be brought into the attic and pushed through the attic vents causing the hot stale air in the attic to be exhausted. Exhausting the hot air inside your attic will allow your home to stay cooler throughout the day.

Whole house fans are rated according to the amount of air they can move. This is measured in cubic feet of air per minute, or CFM. In order to be effective, a whole house fans CFM rating should be 2 to 3 times the square footage of the house.

Overall attic venting is the only limiting factor on how many CFM can be efficiently moved. Attic venting can be easily increased by adding vents. Too many CFMs of airflow without the proper attic venting can cause undue stress on the whole house fan and pressurizes the attic and walls. Too little CFM’s will not provide the desired minimum of air exchanges per hour as recommended by national ventilation experts and may not provide the cooling draft to lower house, attic, and skin temperatures in a timely fashion. 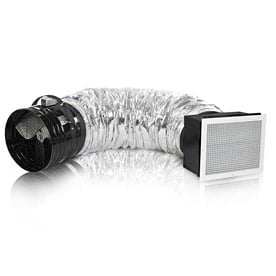 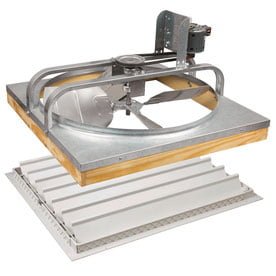 To understand how QuietCool works, we first have to revisit how air conditioning works.

Take a typical American home during a hot summer…

The homeowner comes home after a hot day at work… the outside temperature has reached 90… maybe 100+ degrees … the attic is 140 … inside, it’s 90… and the homeowner turns the air conditioner on… now, let’s switch between “tech talk” and “reality talk” …

Tech talk — an air conditioner cycles the hot “ambient air” within a home through a closed loop system (ducting) that removes the “heat” within the ambient air which then returns as cooled air into the living space.

This cycling of hot-to-cooled air continues until the wall thermostat “senses” that the ambient air temperature has dropped to the “set point” — the temperature that the homeowner “sets” the A/C to go on and off — and the A/C unit turns itself off.

Reality talk — what happens next? Usually within 10 minutes or so, the A/C unit cycles back on… and this cycling on and off continues … well, it continues sometimes all night long, especially in the hotter climate zones throughout the country. The question is, “why?”

More tech talk — The key words above are “ambient air.” An A/C unit merely removes heat from ambient air, but it doesn’t cool down “the house itself.”

The “house itself” is the key to why QuietCool works!

The “house itself” is called “mass.” “Mass” comprises all that is within the house that can retain “heat.” We call this “thermal mass.” The basic principle of “thermal mass dynamics” states that all mass retains heat. The mass within a home includes the floors, wall, furniture, ceilings, curtains and carpets, and the more mass there is — and the more heat the mass is exposed to — the longer it takes the home to cool down!

As you can see illustrated in the graphic to the right, the QuietCool system brings cool air into the home through selected open windows, and the hot air is pushed out of the attic vents giving you a complete air exchange every 3-4 minutes.

QuietCool can be used anytime the outside air temperature is lower than the inside temperature.

Reality talk — what do many people do when they come home after work and it’s really hot inside their home, but the outside temperature has nicely cooled down? Instead of turning on their A/C, many people open up their windows and allow a nice cross breeze to enter their home, which not only feels good, but also cools the home down.

Tech talk — The “passive” cross breeze described above becomes an “active” breeze for QuietCool homeowners, and this is the key to thermal mass cooling.

Passive breezes within a home will eventually cool the ambient air to a comfortable level, but will not move enough air to cool the mass within the home.

When correctly sized for any size home, a QuietCool system will fully exchange the entire air volume of a home 15-20 times per hour, or about one full air exchange every 3 to 4 minutes. To correctly size a system, click on “Sizing a System” in the tab bar.

The “active” breeze that is created by a QuietCool system is how QuietCool “works.”

Mass “cooling” results because the QuietCool system is removing stale hot air and replacing it with fresh cool air; all this occurring at a high rate of speed and volume, 15-20 times per hour.

A “cool mass” home does not reheat as much or as quickly as a “hot mass” home. Within a day or two of installing a QuietCool system, homeowners are amazed when they come home after work… it was 90 – 100 ++ degrees outside, and they walk into a home that is… not 90 degrees, but maybe 72, 74 or 76 degrees.*

The reason is because the mass of the home has been cooled by the QuietCool system, and thus did not reheat as rapidly throughout the day as a typical home would. The initial reaction from new QuietCool owners is one of amazement and is the reason why so many QuietCool sales are made through referrals.

QuietCool is truly a revolutionary product that allows people to save money by turning their A/C off and turing their QuietCool system on!

To calculate how much CFM you need in your home, simply multiply the square footage by 2, 2.5, and 3. This will give you the amount of CFM needed for a Good, Better, or Best system, respectively.

There are two other considerations that need to be taken into account when sizing a system:

Ceiling Height: If the ceilings in the home are taller than 8 feet, be sure to size the system a little bit larger to account for the increased air volume inside of the home.

After determining the total amount of airflow needed in the system, it is time to select a system. We offer these three types of systems:

Basic System: Central Cooling with a single QuietCool fan located centrally in the home. The fans can be from either the Classic or Professional Series.

A centrally installed system is a single fan system that is installed in a central location in the home, as the name implies. A single system would typically be installed at the midpoint of a single story home, or at the top of the stairs in a two-story home.

A single QuietCool system will nicely ventilate an entire home, but lacks the individual room control that a zoned system offers.

A multi-fan zoned system gives the homeowner maximum control over their ventilation and cooling needs.

When sizing a zoned system, the combined CFM of all zoned units (not each individual fan) needs to add up to the total CFM requirements.

All zoned fans can be turned on simultaneously when the entire home needs to be cooled, but a zoned system allows individual bedroom control, for example, and thus zoned systems need to be sized for the zones.

Thus, in the above example, a “superior” zoned system would comprise two or more fans whose total CFM = 6000 CFM or more.

An “advanced” zoned system would comprise two or more fans whose total CFM = 5000 CFM or more.

A “basic” zoned system would comprise two or more fans whose total CFM = 4000 CFM or more.

Venting for your System

Venting for your System

For most homes built prior to California’s 2014 Title 24 new home building codes, the calculation is simple: we recommend a minimum of 1 square foot of net free vent area for every 750 CFM moved by your QuietCool system. The ratio is 1 s.f. : 750 CFM.

The venting requirement is not something of concern to most QuietCool purchasers unless the home was built before the mid 1970s. Most homes built since the mid 1970 will have adequate venting to vent a superior QuietCool system, and all Title 24 homes will definitely have the required venting, or they won’t pass inspection.

However, for all applications, we encourage contractors and dealers to visually inspect, and if necessary measure, the available venting in any attic in which a QuietCool system is to be installed.

Free Estimates are for residential homeowners only. We reserve the right to refuse service to anyone.